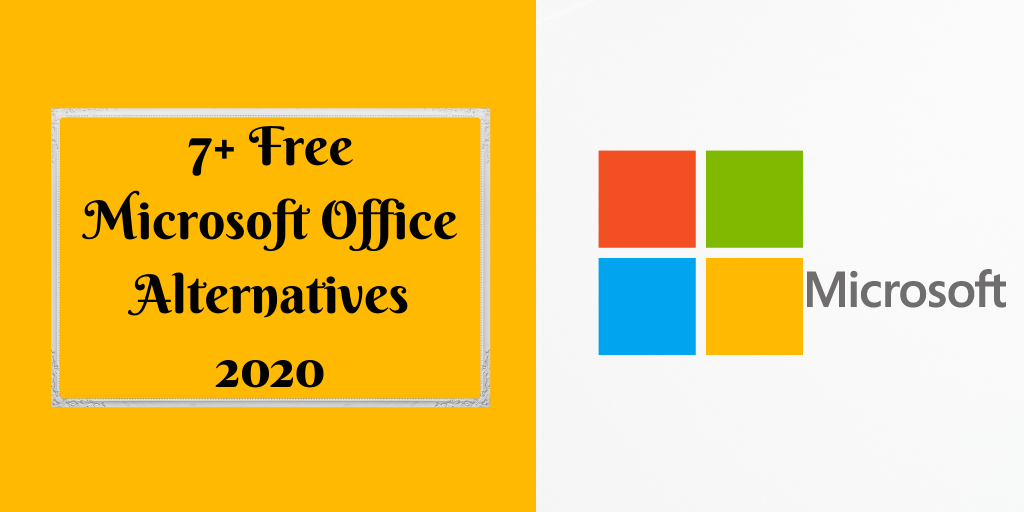 Once upon a time, Microsoft Office had unquestioned rule over the computer, because there were no better alternatives that were fit for the world of productivity. Thanks to software development done in the past few years it can be replaced by numerous suites which are either free-to-use or paid programs.

There are also some web-based programs that can be accessed through your browser with just a few clicks, guaranteeing convenience. All of the below-listed programs are great packages that include most of Microsoft Office’s features. Some of them are available only for the Mac and some support multiple operating systems (Windows, Linux). What’s even better is that they cost much less or can be used for free.

Here are 7+ free Microsoft Office Alternatives for you. So, let’s see our choices!

Libre Office has anything you could want from a productivity suite. It has the same source code as Microsoft Office, but it looks differently. It has its own modern interface that looks and feels a bit like Microsoft’s.

You can further customize your program, by using the wide array of well managed extensions that come with it. This is the 5th generation, so it got a big speed boost, VBA macro stream, cloud storage support and a lot of other great additions in its latest update.

Libre Office also has a very active online community that has created many extensions and templates that add some new features to your software and improve existing ones. All of them are available to be downloaded for free. Packing so much power and so many great features, Libre Office is undoubtedly the best free office software you can download for Windows.

It is available for Windows, Linux and Mac.

SoftMaker FreeOffice an amazing free suite that is compatible with all of Microsoft Office’s file formats. It can handle Microsoft Word, PowerPoint, and Excel files. Also, can export into PDF and EPUD formats. It doesn’t offer as many programs as Libre office and even its spreadsheet charts are not as great, but it is much faster, can open WordPerfect and Office documents that are password-protected, but it has all the basics of office software. Another amazing feature is that it’s available for mobiles, as it supports Android too.

Features aren’t as extensive as Microsoft’s packages, but they sure are reliable. The FreeOffice suite is available for Windows, Linux and Android.

Apache OpenOffice is the oldest among Microsoft Office alternatives and it has developed to the point where it can serve as complete replacement. It can do basically anything Microsoft Office can, like databases, graphics, creating word documents, spreadsheets, and presentations and it can also handle a lot of other common file types.

The suite has six different applications:

All of the programs get frequent updates like interactive crop tools and annotation capabilities. Apache strives to keep giving you more control, increase file compatibility and to make its programs more reliable with each update.

There are also a lot of templates available for common documents like resumes, invoices and other frameworks that might come in handy. You can download the program for Windows, Linux and Mac OS X, but keep in mind that it’s an open source program, so it might take you longer to learn to use it than the Microsoft Office suite.

Featuring the ribbon interface that we all came to know and love from Microsoft Office and it offers a lot of functionality and a cleaner look, but the free edition has some serious limitations.

WPS Office can either come free or come at a small fee, depending on what your preferences are. You can use the free version which is good for home and school use or you can upgrade to the business version. It has the additional features that compliment office work. The free version starts out with a 30 day trial period of the premium upgrade, so you can get down to some serious work straight away if you download it.

WPS Office comes with a much cleaner look and a fast workflow, but the limitations of the free version might put you off. You can download the program for Windows, Linux, Android or iOS.

Most apple users already know that Apple’s iWork started out as a direct competitor of the Office suite, stating „when the Office suite won’t work, this will”. If you work with a Mac, the iWork might just be perfect for you.

If you are switching to iWork from Office, then you’ll have a lot to get used to. Apple’s minimalistic layout can also be seen here too and some tools are a bit hard to find because of this. The latest updates have brought a lot of functionality and compatibility for Microsoft files. All three apps work well and provide a steady workflow.

There is also an iCloud integration, so you’ll always have your documents safe and in reach. As any other Apple software, iWork can only be downloaded for the iOS.

Google Docs goes head to head with Open Office and for some very good reasons. Its best feature is that it’s accessible from anywhere as long as you have a working internet connection. Cloud-based programs aren’t always that fast and this one isn’t either. But it is integrated with some of Google’s services like Gmail, Google Calendar, and Google Plus.

The program has a nice slick design that is easy to look through and you’ll probably get used to it quickly if you use Google Chrome. You can also use all of its features, independent of you having a Google account or not.

The program also supports some of the most common file types like the .doc, PDF, and many more. You can access Google Docs through your web browser any time you want.

Atlantis nova holds nothing fancy, no design that you could fall in love with, but it still does a good job. It is a program that is focused primarily on speed and features that make it a really releasable productivity suite.

The program is full of fast and helpful tools for writing resumes, essays, letters and any other document you would wish to create. It has three toolbars and each of them has a wide range of tools and features.

You can give your productivity a mayor speed boost with this program. Content is easily created, moved and modified with its massive arsenal of tools, but you can also quickly hide all of them with just a click. The program’s toolbars can seem a bit crowded and overwhelming at times, so this button really comes in handy.

Those who used Microsoft Office back in the day will probably find some similarity in their tools and interfaces. Although isn’t as appealing as any Microsoft program, but it more than makes up for that in speed.

This classical looking program will cost you $35 a month, but comes with a month free trial period, so you have all the time you need to see if it works out for you. You can download it for Windows and start working on your projects right away.

Zoho Docs is used by many popular companies like Coca-Cola, BBC, which is surprising if you consider the fact that it isn’t such well-known software. It is understandable though because not many programs offer large cloud storage space, guaranteeing to keep all of your files safe.

Zoho comes with three cloud-based programs which include handling word files, spreadsheets and presentations. Their services also include desktop syncing and document versioning.

It can also be used on Android and iOS mobiles and you are able to synchronize it with other services like Google Drive and Dropbox.

Check out Zoho’s great services before settling for Google Docs instead!

These are some of the best Microsoft Office Alternatives that fulfill the massive demand for productivity suites. Each of these programs has some unique features and all of them are worth checking out in our opinion.

Some of the big suites come with a price tag, but they are still much cheaper than purchasing a full Microsoft Office suite. No matter what your preference is or what kind of project is waiting for you, these office suites are sure to help you in all of your efforts!

If you know any best Microsoft Office Alternatives, let us know in the comment section.

How To Do Affiliate Marketing On Blogs?